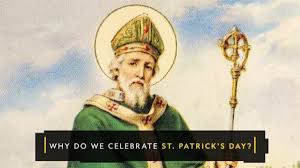 The Irish have for centuries been grouped together in large families known as clans. When one group gets too large there may be a splinter group. The son of someone named Neill would start a new family called MacNeill or McNeill. The word “Mac” or “Mc” means “son of”, and a grandson would start the O’Neill clan since the “O” is short for “grandson of”.

Some Famous Irish Characters from History

You might find it a somewhat interesting history. Much of that which is written about Ireland is simply folklore and largely untrue, yet it still makes a provocative story.

St. Patrick is among the first of the Irish legends. Actually, he was an Englishman who was captured as a young boy and held as a slave in Ireland until he escaped. Years later he returned as a monk and because he knew the language was able to convert large numbers to Christianity. It is often said that he rid Ireland of snakes, but there were no snakes in Ireland. The only real possibility is that this was a metaphor for the “evil spirits” of the Druids who were previously the religious leaders in Ireland.

There is a great deal of folklore associated with St. Patrick who due to the continued writings of the monastery in Armagh which held his relics became the patron Saint of Ireland in the 8th century some 300 years after he built up the religion.

St. Brendan the Navigator was a contemporary of St. Patrick and he was more of a sailor than a Christian monk converting the masses to Christianity. In the latter part of the 5th century he built a small boat out of animal skins called a curragh and set sail with 17 men. They returned seven years later with strange tales of sea monsters, crystal palaces, saber-toothed water cats and little furry men. Later, it became clear that they probably witnessed whales, icebergs, walruses and Eskimos.

To add some credence to the story, the Vikings used Irish navigators enroute to Vinland, and spoke of Irish monks in Iceland in their 10th century writings.

So, did St. Brendan arrive in Newfoundland 500 years before the Vikings?

Tim Severin certainly thought so. In 1976, he built the same type of boat and crossed the Atlantic from Ireland in several months (actually, the second part of the journey was only 51 days from Iceland). While he doesn’t prove that St. Brendan was there, it definitely proves that it could be done.

And, was St. Brendan the first? Interestingly, he didn’t claim to be at the time. In fact, legend describes St. Mernoc to be among the first. The legend of St. Brendan was not recorded until the 9th and 10th centuries when it became one of the most popular medieval legends.

The Last Emperor of Ireland

In search of an Emperor or a King to acclaim, the Irish developed the story of Brian Boru. He is said to be the first King and led the Irish to oust the Vikings from the lands and re-establish Irish rule. Just a couple of problems: the Vikings never really occupied Ireland to a major extent and Brian Boru’s leadership was challenged shortly after he pronounced himself King. He was the self-declared Emperor of Ireland in 1011, but by 1012 his subjects had risen against him in rebellion. The great stories of his many accomplishments were recorded and popularized two hundred years later, and by then, who could prove whether they were right or wrong.

Now, the interesting thing about history is that it is always written by the victors. The vanquished really have no storytellers. So, let’s think about this! What you really need is a good “publicist”. If there’s no one to tell your story you’re not going to be famous. In fact, I could say that Brion O’Madigan was the first Irish sailor to arrive in Canada, many years before St. Brendan and St. Mernoc. And, the only reason why you haven’t heard of him is that he was not a saint, didn’t convert anybody to Christianity and didn’t have a “publicist”.

However, one thing that we do know to be true is that some nameless Irish sailor was the first, since both St. Brendan and St. Mernoc were following in his footsteps.

So, I’m simply giving the poor nameless chap a name for all his efforts:

St. Patrick and the Discovery of America

Since this is an article about real estate how does this tie in with St. Patrick?

Well, it may be a little of a stretch but here it goes. St. Patrick introduced the Roman alphabet to Ireland. This allowed many writers of the time to learn Latin and transcribe their thoughts in a manner in which they could be understood by others. Latin was the universal language of the scholars. It could be transcribed and read at all the universities in the middle ages. Largely, this would be the monasteries and other institutions related to the church. St. Brendan’s voyage was written down and transcribed many times over. You cannot say published because this was centuries before the invention of the printing press.

The Latin Version called “Navigatio Sancti Brendani Abbatis” was read by hundreds of scholars throughout Europe. It chronicled the voyage of St. Brendan to the Americas and was well known to Christopher Columbus and Queen Isabella when they were planning the 1492 voyage. About 125 copies, all of course, original manuscripts copied from the first transcription or later versions survive today.

So, although there is no actual evidence that St. Patrick influenced St. Brendan to sail to the Americas, there are at least 125 copies of the Navagatio text that influenced the travels of Christopher Columbus. So, had St. Patrick not introduced Latin to Ireland, this story would not likely have been told, and make its way to Spain.

So, that’s how St. Patrick discovered America. Perhaps a few pints of green beer today will help you understand. It’s either blarney or it’s true, and your challenge today will be to see how many green beers you have to consume before you absolutely know that it’s true!

May the luck of the IRISH be with you today and ALWAYS!!!