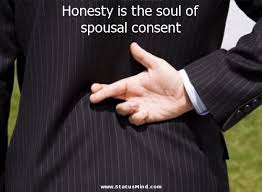 Agreements of Purchase and Sale in Ontario contemplate the need for the execution of the Spousal Consent.

The Family Law Act has changed the common law. It has created increased rights for the spouse who does not have legal title to the property.

There is a restriction however, and this change in rights will only apply to a “matrimonial home” which is defined under the Act to mean a home that is used as a residence*. There can be more than one. So, this could apply to a house in the city, a summer cottage, a ski chalet and a farm. There is no limit on the number. The only requirement is that the property was used as a residence.

The increased rights that are afforded to the non-titled spouse are:

So, let’s have a look at the document. The agreement of purchase and sale contains two provisions that deal with the matter of spousal consent.

Section 21 of the Agreement provides as follows:

Family Law Act: Seller warrants that spousal consent is not necessary to this transaction under the provisions of the Family Law Act, R.S.O. 1990 unless Seller’s spouse has executed the consent hereinafter provided.

So, what does that mean? If John and Mary are married and the title to the matrimonial home is in John’s name, then Mary has to sign. John is warranting to his purchaser that

Really, that means that Mary is the legal spouse. This is not a common-law, living together arrangement under the Act. It is a legitimate marriage and the possessory rights provisions apply**.

But, by any reasonable measure this is a fairly weak warranty on John’s part. If Mary has signed, and her consent is truly not necessary, then “no harm done”. When it comes to signing the Transfer/Deed in the lawyer’s office, she will simply be advised that her signature is not required.

Now, let’s have a look at the other situation. She doesn’t sign. John’s warranty is that her consent was not necessary. However, this was incorrect. She refuses to sign-off her possessory rights on closing. The purchaser can sue John for damages, but the purchaser cannot complete the deal. Mary has not signed the Transfer/Deed and no one can force her to do so. Mary has an equal right of possession, and the only way to get her out is by Court Order***.

We must also presume that John and Mary are not on speaking terms, otherwise the problem would have been solved and the deal would have gone through.

This brings us the next provision in the agreement of purchase and sale: the spousal consent.

This paragraph is set out below the acceptance of the Offer by the vendor, and provides as follows:

Spousal Consent: The Undersigned Spouse of the Seller hereby consents to the disposition evidenced herein pursuant to the provisions of the Family Law Act R.S.O. 1990, and hereby agrees with the Buyer that he/she will execute all necessary or incidental documents to give full force and effect to the sale evidenced herein.

The document indicates that it is being executed under seal and is an enforceable agreement, even though Mary is not receiving any consideration.

This really means that Mary will sign the consent provision in the Transfer/Deed.

So, let’s recap these situations

Now, we come back to the customary practice of real estate practitioners. We are now considering the execution of the Spousal Consent which follows the acceptance of the Offer by the Seller.

Does the spouse need to see the offer?

Does the spouse need to see the final agreement?

Should the spouse execute, and re-execute the spousal consent, at the same times as the seller has signed the agreement?

Let’s look at that provision again:

Spousal Consent: The Undersigned Spouse of the Seller hereby consents to the disposition evidenced herein pursuant to the provisions of the Family Law Act R.S.O. 1990, and hereby agrees with the Buyer that he/she will execute all necessary or incidental documents to give full force and effect to the sale evidenced herein.

Fundamentally, the agreement is between the vendor and the purchaser. The consent is just a waiver of the possessory claim under the Family Law Act. You will see that there really is no expectation by the drafters of the agreement (the OREA Forms committee) that more than one time for the signature may be required, or that the date of the spousal consent should be after the execution of the agreement. There is a specific provision with respect to confirmation of acceptance dealing with the issue of “time”. The purpose is to ensure that the offer was accepted within the time limited for acceptance. So, in that regard there is evidence relating to “time”. But, not so, when it comes to the spousal consent! Presumably, it could be anytime.

Also, if you examine the words carefully, it says in terms of its operative provisions:

“CONSENTS to the DISPOSITION evidenced herein”

Specifically, it does not say, agrees to the transaction, approves the offer, accepts the agreement. There are no words that suggest or imply that the spouse has any involvement in the deal, other than simply to “get out”.

Obviously, that was the interpretation of the drafters of this Form of Agreement of Purchase and Sale.

An outstanding question is whether this interpretation is a correct one under the terms of the Family Law Act. Perhaps not!

Let’s consider a scenario. Mary and John are not getting along. Each of them have agreed to split up and seek their own lawyers to negotiate a separation agreement. John now sleeps on the couch in the family room, but his belongings are still upstairs. They have agreed to sell the house. The family room is tidied up for showings, so no one would know that John lives there.

The house is listed at $699,000. There is a $450,000 mortgage registered against the property. John and Mary agree that she will get all the equity out of the house. John is getting the car, the boat and retaining his pension.

All of that seems fine until Howard the real estate agent comes along with an Offer for $650,000, closing June 30th. He presents it, and John signs it back at $690,000. Howard gets Mary to sign the spousal consent. The purchasers come back again at $660,000, but this time, closing January 15th.  John feels that he wants to get rid of the house and he also wants to get rid of Mary, so he accepts the Offer. He figures he could clear his stuff out of the house in about an hour. The rest is Mary’s problem.

Howard says this is fine. Mary has already signed the document. She does not own the property, she only has to waive her possessory rights. Since she has already done that on the $690,000 offer, she doesn’t have to sign it again.

Do you see any potential problems here?

This time, let’s assume that you have to assist Mary with her potential claim. What type of claim might that be?

Consider the following allegations to the Real Estate Council of Ontario (RECO), by Mary:

All in all, those allegations seem somewhat plausible.

Is Harold the real estate agent under any specific duties with respect to Mary? Does he have to protect her interest? Or, is he just acting for John? And, what about the purchaser, does Harold owe him anything? What if the purchaser is Harold’s client?

Well, if you believe all that, then just have Mary sign anywhere, anytime and leave it at that. However, if you think that Mary possibly has the right to give her ‘informed consent” under the Family Law Act, then you will want Harold to explain the entire agreement to her, and ensure particularly that she understands the price, the closing date and any other important terms. In fact, you would probably want her to sign an acknowledgement for her copy of the agreement. You would also want to document that her consent was given after the deal was struck between the parties.

Perhaps this is a provision in the standard form agreement of purchase and sale that could be amended.

*the specific definition of matrimonial home is set out in the Act as follows:

18.  (1)  Every property in which a person has an interest and that is or, if the spouses have separated, was at the time of separation ordinarily occupied by the person and his or her spouse as their family residence is their matrimonial home.  R.S.O. 1990, c. F.3, s. 18 (1).

** you may want to refer to the specific rights dealing with possession:

(2)  When only one of the spouses has an interest in a matrimonial home, the other spouse’s right of possession,

(a)  is personal as against the first spouse; and

*** also, how do you sell a matrimonial home in compliance with the Act:

21.  (1)  No spouse shall dispose of or encumber an interest in a matrimonial home unless,

(a)  the other spouse joins in the instrument or consents to the transaction;

(b)  the other spouse has released all rights under this Part by a separation agreement;

(c)  a court order has authorized the transaction or has released the property from the application of this Part; or

(2)  If a spouse disposes of or encumbers an interest in a matrimonial home in contravention of subsection (1), the transaction may be set aside on an application under section 23, unless the person holding the interest or encumbrance at the time of the application acquired it for value, in good faith and without notice, at the time of acquiring it or making an agreement to acquire it, that the property was a matrimonial home.  R.S.O. 1990, c. F.3, s. 21 (2).